The cost of design and mask sets have dramatically increased with the most advanced processes. It is critical for design and mask data preparation teams to include robust converter tools from GDSII or OASIS ® to OASIS MASK in their flow in order to increase their productivity and remove risk of error.

The new standard, OASIS.MASK or Semi P44, is being introduced to address the requirements specific to photomask layout representation. This new standard, a subset of OASIS ®, and as such fully compliant with it, introduces constraints that reflect the real-world limitations of mask manufacturing (such as a limited number of masks per process) that make the interpretation and exploitation of the OASIS.MASK databases more efficient and reliable.

FIGURE 1 represents the functional hierarchy of a chip as described in a standard OASIS® file. FIGURE 2 represents the same chip with the topological hierarchy in OASIS.MASK format. We can see that all small (common) repeated cells are described the same number of times in both representations, while large cells have been flattened. Flattening big functional blocks has no major impact on the final size as these cells usually appear at most a few times in the chip. 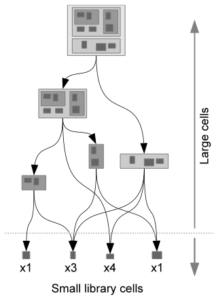 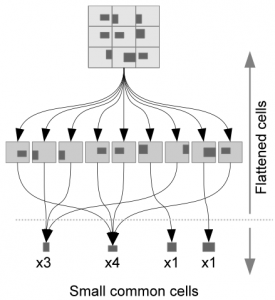 GOTomat leverages the most advanced features of the OASIS.MASK format to allow fast processing of the resulting .oam file by the new generation of XYALIS tools (prefixed with GOT).

GOTomat allows layer conversion during the generation of the output file.

GOTomat benefits from the advanced GDSII & OASIS ® TOOL (GOT) data representation engine developed by XYALIS in order to manipulate the largest layout files in a minimum computing time with minimum disk and memory requirements.

GOTomat is highly parallel to provide the best performances

GOTomat includes a distant access mechanism based on HTTP sockets for driving the tool in client/server mode.

Read more about OASIS MASK : “Is it time to switch to OASIS.MASK ?”

This site is registered on wpml.org as a development site.